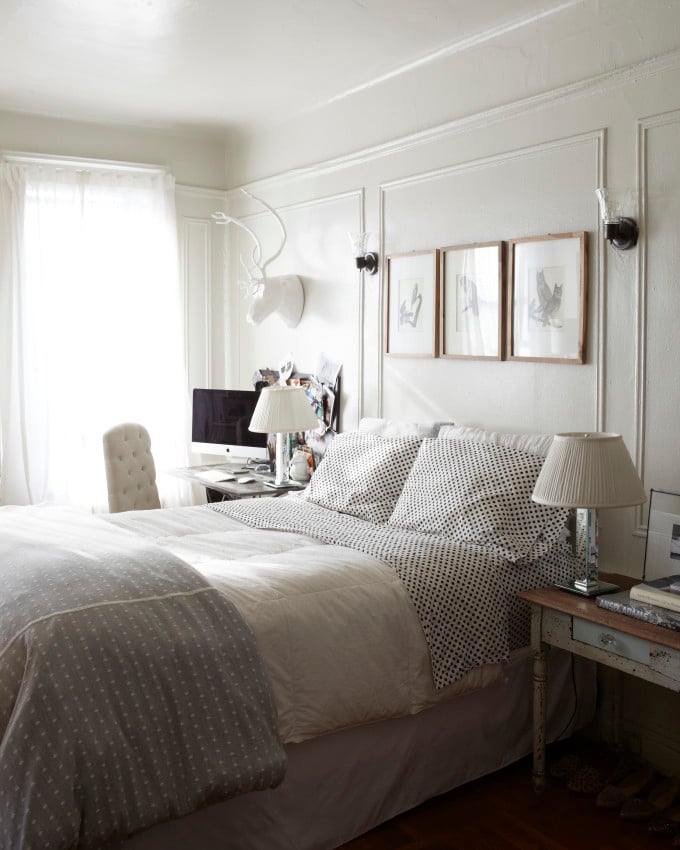 J. Crew creative team member and freelance photojournalist Taylor Swaim lives in a sunny corner apartment in the Crown Heights neighborhood of Brooklyn. Her home proves that with a little creativity (and a lot of love) you can turn a first apartment into something amazing. Here’s a peek inside… 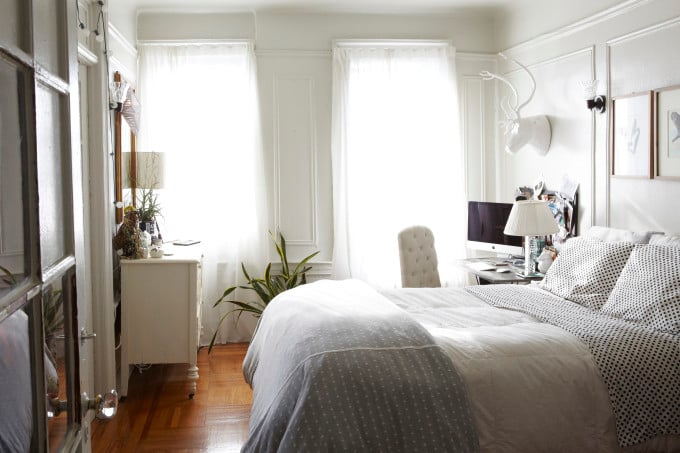 On NYC apartment hunting: I’ve been living here just shy of three years. I moved from Indiana to New York City for work, and spent weeks looking for a place. Finally, I saw a listing for an apartment in this building. It was the Fourth of July and I thought, “Well at least no one else will be looking!” But when I got there, the guy said it had rented while I was en route. I think he saw the look of despair on my face, so he said, “We have another unit that was just vacated yesterday. If you’re willing to put your blinders on, I’ll show it to you.”

The place was horrible. Things were broken; everything was covered in a layer of dirt and grime. At first I was like, “No. No way.” But then a couple came in to see it, and they were hemming and hawing, pointing out the possibilities. I didn’t want to lose another apartment, so I said if I could do some renovations I’d take it. The lease didn’t start until August, but they let me spend July working on it. I’d come here every day after work and on weekends to scrub and paint. 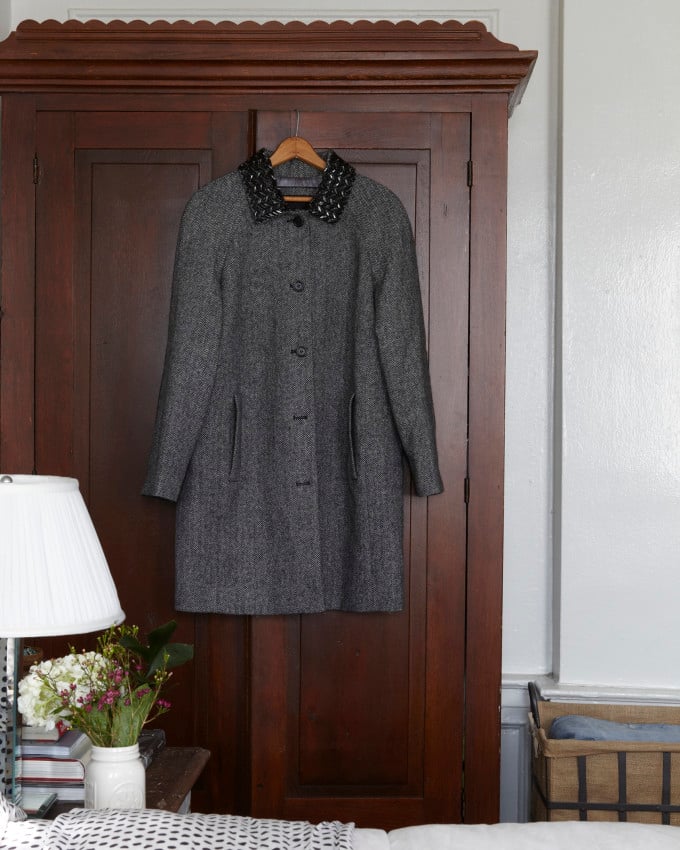 On creative storage: There’s only one closet in the entire place, so storage is a lot of smoke and mirrors. Things are stashed everywhere — in the armoire, behind doors, under the couch. Some people don’t necessarily think to keep glassware or beauty products on display, but when you don’t have storage, it really helps if you’re not afraid to keep things out in the open. 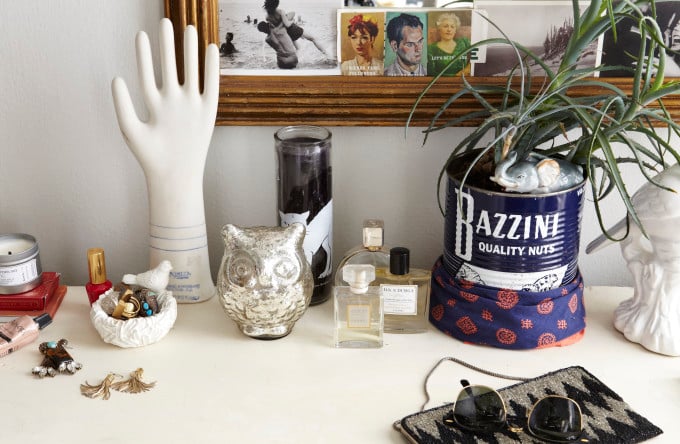 On how to make your bedroom smell amazing: I’m obsessed with everything from Cold Spring Apothecary. Their Amber Fig diffuser is in my bedroom, and I’ll get whiffs of it when I’m lying in bed. Their candles are also some of my very favorites. I also splurge on Aesop hand lotion, which I keep on my dresser. It feels like a luxury, but smells so good and lasts forever. 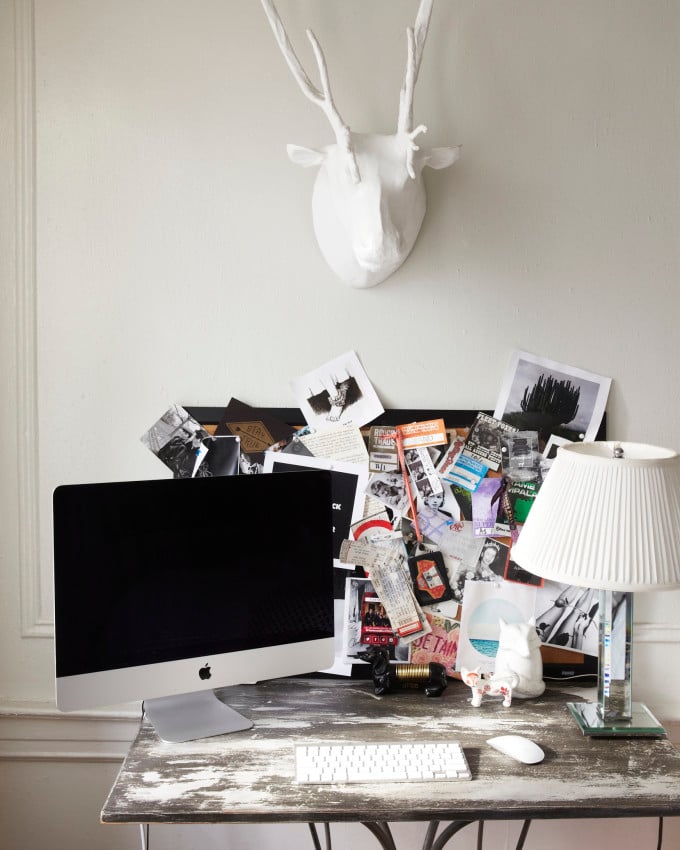 On setting up a workspace: The desk is actually an outdoor patio table, with a wood top instead of the original glass one. It was a yard sale find. I got a desktop computer last year, and it has changed the way I work. When I had a laptop, I would try to work in bed or on the couch, but now I’m forced to sit at a desk, which I kind of love. (If I’m being honest, though, my computer doubles as a Netflix machine! I’ll rotate the screen to watch movies in bed.) 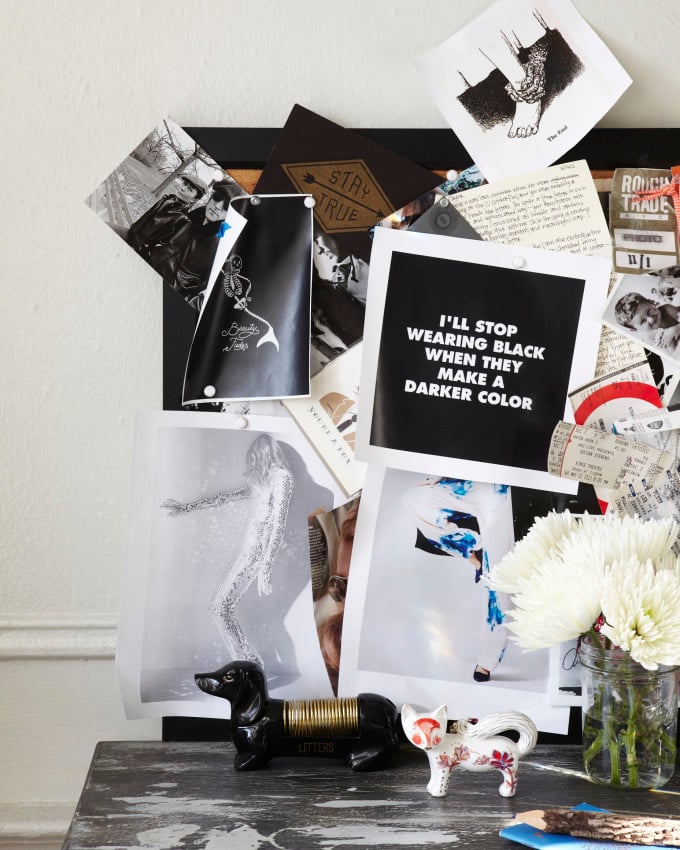 On landing a dream job: I work at J. Crew, where I’m the Brand Creative Stills Coordinator. That basically means I’m in charge of making sure all the pieces get photographed for the website. Before this, I worked at a small music label in Indiana. A friend of a friend came to visit, and said, “I like your style, I think you would be a great fit at my company.” I sent her my resumé, but I didn’t even know where she worked! A couple weeks later, J. Crew started recruiting me. If you had told me a few years ago that I would be working for J. Crew — or even living in New York — I wouldn’t have believed you! 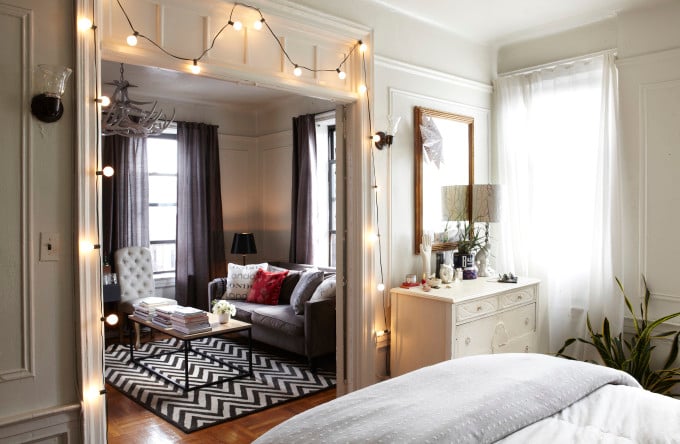 On the importance of lighting: Originally, I put the globe lights up one Christmas, but it was so nice having them on at night that I now keep them up year-round. They create a really nice glow in the bedroom, and in the morning I don’t have to turn on harsh lamps. I also replaced most of the light fixtures in the apartment. They had been those typical overhead dome lights and I changed them to a hanging bulb light and chandelier. I’m a big believer in the power of good lighting and what it can do for you.

On a lucky find: I once saw a white ceramic antler chandelier in a store here, but it was over $3000, which wasn’t going to happen. Then I went home to Indiana and saw this silver one for sale at an antique shop. I offered them $50, and they took it! I originally planned on spray painting it white, but surprisingly, it looked really good as is. It’s actually made of plastic! 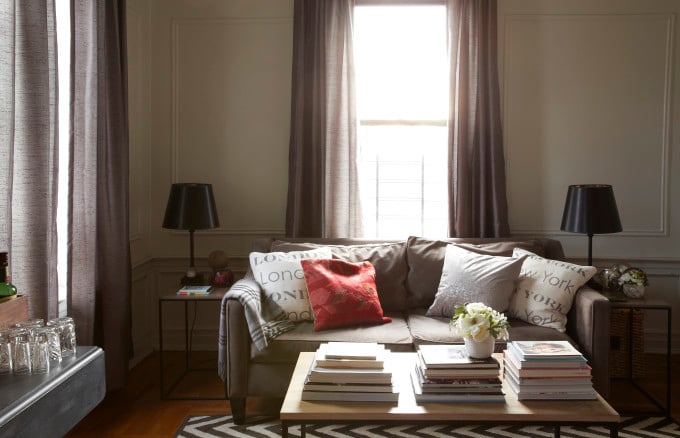 On investing in key pieces: I always plan out a space before I move in. I’m one of those people who needs to feel settled almost immediately. When I moved to New York, I already owned my dining table and some vintage furniture. As soon as I knew the layout of the apartment, I invested in the couch and the coffee table from West Elm. Even when you’re young and on a budget, I think it’s good to have something in your home that feels nice and durable. Then I made one very long trip to IKEA for all of the shelving. 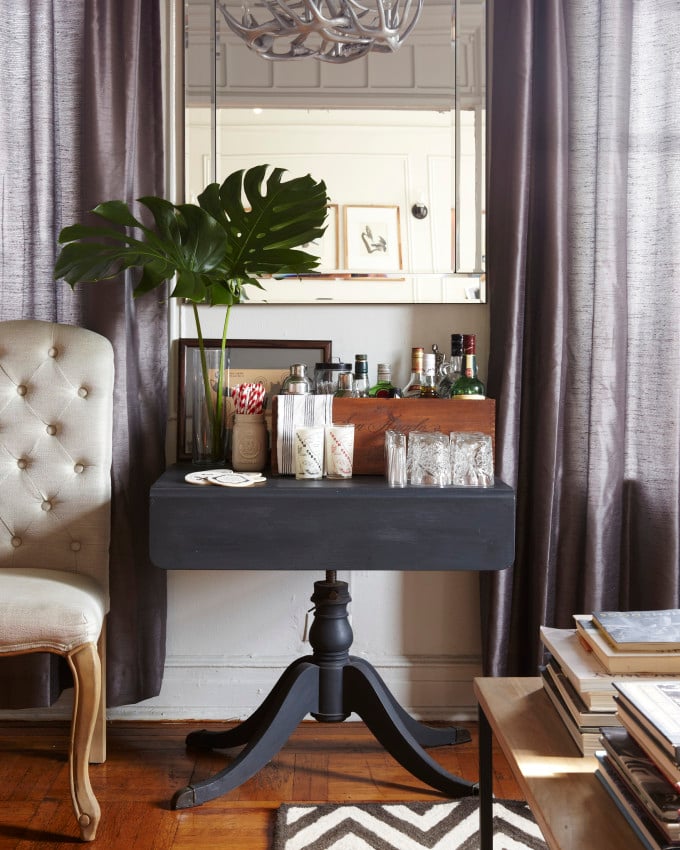 On the joys of a well-stocked bar cart: I inherited the table from my great-grandmother. The height adjusts and the leaves fold out, and I’ll serve appetizers or cheese when people come over. It’s nice to have a designated area. I try my best to limit it to when friends come by, and not as a personal bar! My cocktail-making ability is not outstanding, but I like Whiskey Gingers — that’s my go-to drink when entertaining. 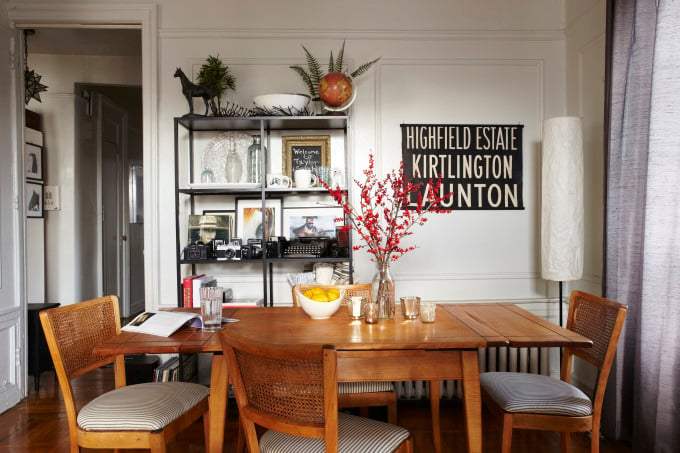 How to decorate on a budget: When you’re on a budget, you have to find things that work and not worry about the name or brand. My lamps are from Kmart. My end tables are from Target, almost ten years ago. My curtains are a few inches shy of the floor — I know the cardinal rule of curtains is that they should touch the floor, but these were what I could afford, and they’re fine for now. 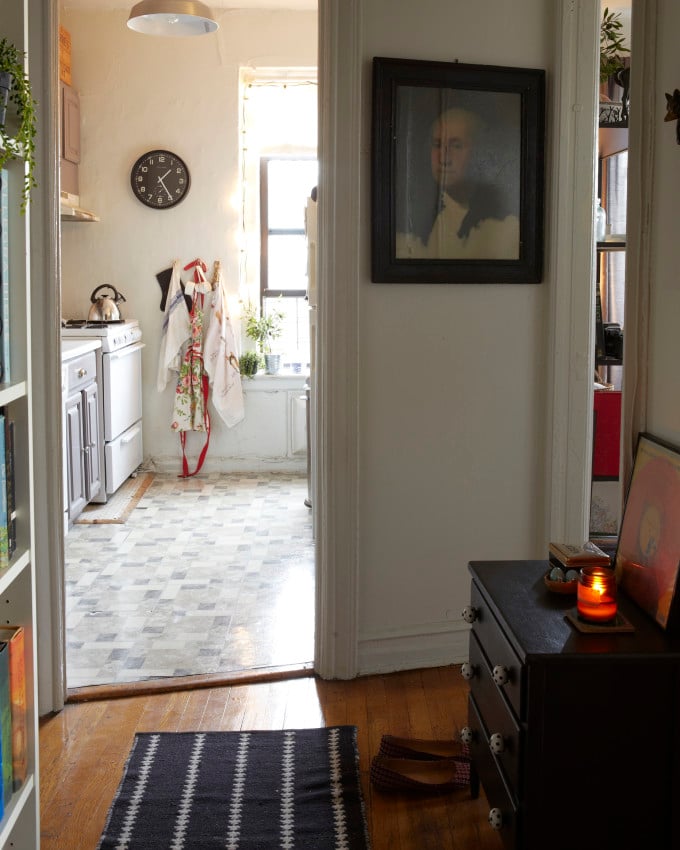 On making playlists: After working at a music label in Indiana, I amassed a pretty big collection of songs. I still listen to a lot of the bands I used to work with, and love making playlists for when I’m hanging out or when people come over. Here is one of my favorite Spotify mixes for doing things around the house. 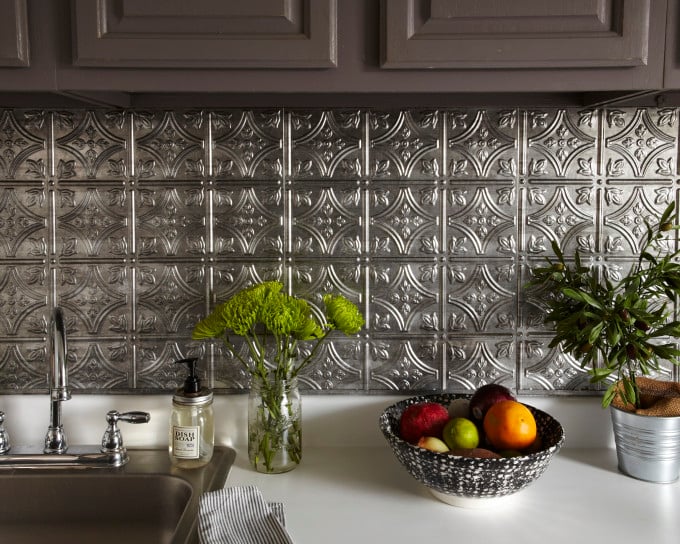 On DIY kitchen renovations: In the kitchen, I updated everything except the floors. I painted the cabinets gray and added the vintage-inspired backsplash. (I didn’t want to have to explain the former rainbow tile backsplash every time somebody came over!) You can buy inexpensive plastic sheets that are made to look like old tin ceilings. You just cut them to size and affix them with very adhesive tape. I was nervous they might pop off the wall, but I’ve never had a problem. 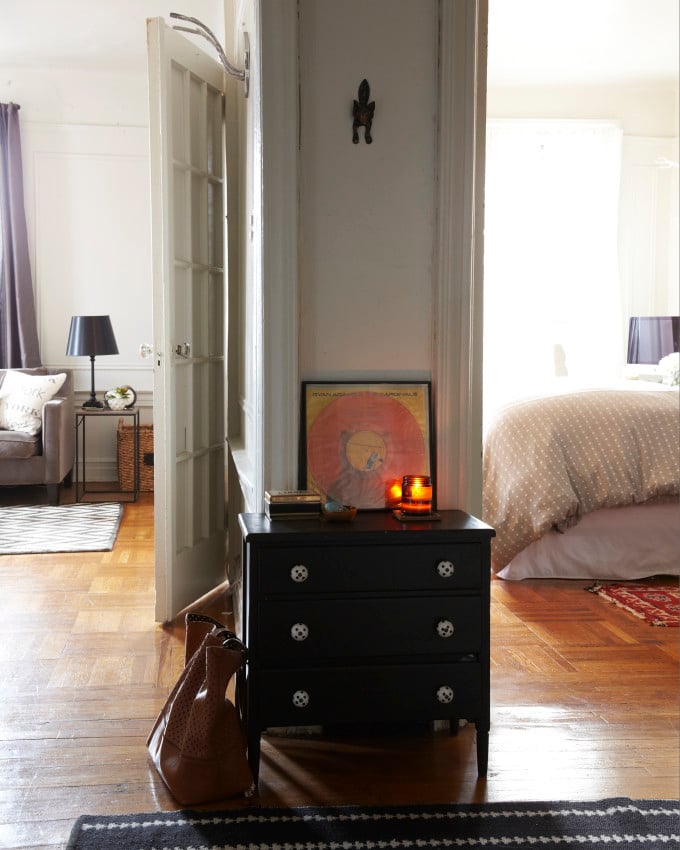 On keeping magazines: I’m guilty of keeping years worth of magazines, which I keep in a big basket next to the couch. I absolutely love The Gentlewoman. It has the most gorgeous portraits of women, in both the written and photographic sense. I’m also into Martha Stewart Living, and these days I like House & Home. If my home caught on fire, my old issues of Domino would definitely be one of the things I’d run back for. One of my favorite things to do on weekends is to sip a cup of coffee and flip through a magazine. 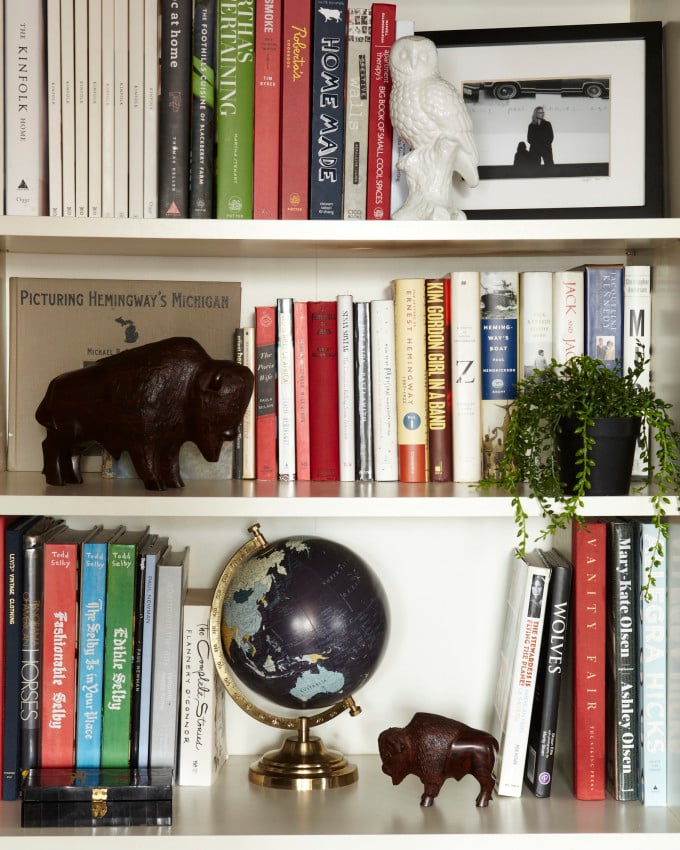 On creating storage: I’m definitely not a minimalist. I have a lot of books and a lot of tchotchkes! Most of them were found inexpensively at roadside antique shops in the Midwest. Sometimes I’ll look back at photos from when I first moved into the space and it looks so sparse, in a good way. I keep thinking maybe it’s time to get rid of some things. 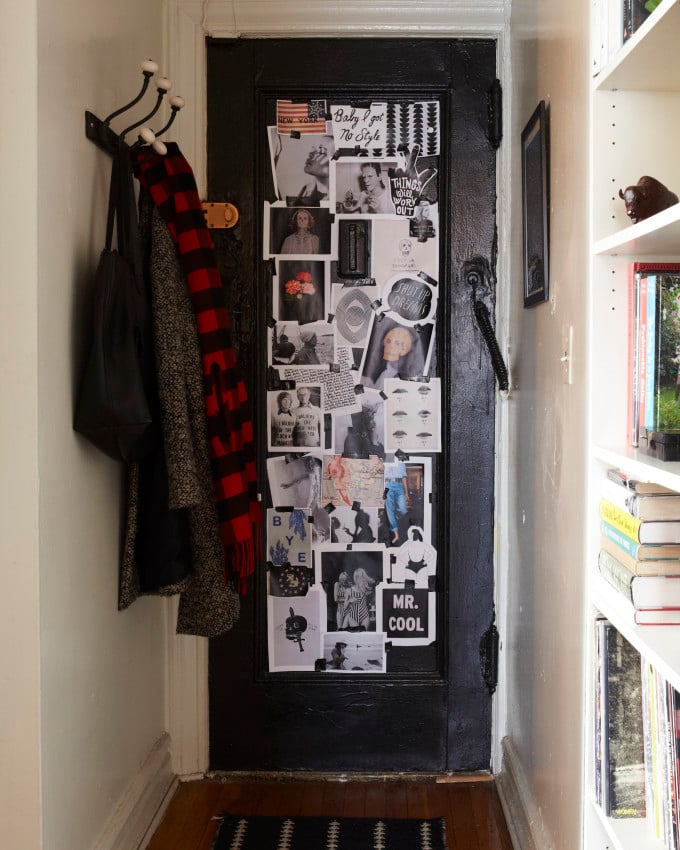 On loving what’s right outside the door: Crown Heights is very diverse, and everyone in the neighborhood is friendly. I see the same people on my walk to the subway every morning — there’s a woman on the corner who’s always watering her flowers, and a guy who sits outside and says good morning. I have a few favorite spots — Little Zelda for coffee, Barboncino for dinner and dates, and Elsie’s for amazing donuts and ice cream. It’s very comforting to feel like I’m part of a community rather than a big city.

Thank you so much, Taylor! Your home is lovely and inspiring.

P.S. More home tours, including a rainbow bookshelf and a teeny-tiny space.

(Photos by Alpha Smoot for Cup of Jo. Styling by Beth Flatley. Interview by Caroline Donofrio.)