For several years, Sarah Andelman, the founder and creative director of the cult Paris boutique Colette, has been a regular visitor to the Catskills, where she and her family have owned a house for the past decade. In 2011, she got married in Woodstock, and she now spends many of her holidays and summers in the region. “I think I feel a little guilty spending so much time upstate,” she recently told T in an email from the house, where she and her family had come from Paris to celebrate Halloween.After discovering the wealth of locally made products — from jewelry to candles to granola — over the years, “it made sense for me to bring all of it to Paris, where the Catskills are really unknown,” Andelman said. And so starting Nov. 16, Colette will feature a collection of goods, art, music and literature produced in that triangle stretching from the Hudson Valley to Delaware County and down to the Pennsylvania border. Among the wares on offer are tallow-based soaps from Sawkill Farm in Red Hook, bug sprays from Cold Spring Apothecary on the Hudson, maple syrup from Westwind Orchard in Accord and cider from Wayside Cider in Delhi. There will also be totes and backpacks, as well as a T-shirt from Phoenicia’s Graham & Co. hotel that trumpets its battle-cry slogan: CATSKILLS VS. HAMPTONS.Cynics might say that it was only a matter of time before the marketing of the Brooklyn hipster would give way to the marketing of the upstate “hickster.” But it’s clear that Andelman’s connection to the Catskills is more personal than it is commercial. She’s friendly with some of the people she is featuring and has chosen to showcase not just the things they make to eat and wear, but the songs they sing and the fantastical and folkloric imagery they dream up.Will Lytle, a young artist from West Hurley whose work will be featured at Colette, sketches fairy-tale-like comics that evoke the dark humor of Maurice Sendak and Edward Gorey. Andelman happened upon his work a few years ago at a market in Woodstock, and asked him to make zines as gifts for her wedding guests. (Lytle will be producing a wall mural at Colette.) Jeremy Bernstein, a.k.a. Burnell Pines, a musician whose folk- and psychedelic-rock-inflected mountain songs recall the ’70s Woodstock of his youth, and Anastacia Bolina, who fabricates puppets and sculptures from roots, garlic stems and other organic detritus, are both neighbors of Andelman’s.Andelman’s decision to spotlight the Catskills is a testament to the growing number of young do-it-yourselfers in the region in recent years. The designer Asa Nishijima was born and raised in Woodstock but spent eight years in Tokyo crafting leather goods for Yohji Yamamoto before coming back to his hometown and launching PMW MFG, a line of American-made rucksacks and totes. And while PMW MFG (short for Peters Mountain Works Manufacturing) has a mountaineering feel to it — with its cordura and diamond-ripstop fabrics and nylon webbing — it also edges toward high-fashion experimentation in its collaborations with Opening Ceremony, the Ace Hotel and the designer Bernhard Willhelm.Nishijima, along with his jewelry-designer partner, Jodi Busby (whose delicately cast bronze, silver and gold bracelets and necklaces are also in the show), runs D Day, a small boutique in Woodstock that features almost all local talents: There are sunglasses by young label Grey Ant, which recently moved its operations there from Los Angeles, as well as ethereal cashmere knits by the Hurley-based Ryan Roche, whose hats and horsehair bracelets will also be presented at Colette. 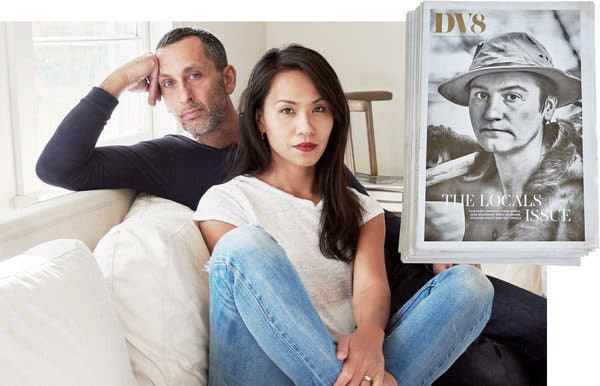 Nhi and Michael Mundy, founders of the magazine DV8.In a converted World War II textile factory in nearby Kingston, Joshua Vogel uses vintage lathes and hatchets to hand-carve stunning turned-wood sculptures, bowls and spoons out of local sugar maple, catalpa and white oak. Andelman discovered one of his pieces — a jug-shaped vessel of tulip poplar wood — in Christian Liaigre’s showroom in Paris and inquired about purchasing and shipping it to her upstate home, only to find that it had, in fact, been made just 40 minutes from there. Two young publications included in the show document the interesting people living in the area. The photographer Kate Orne, who is based in Highland, says that in the six years that she’s lived upstate, she’s been struck by the intense creative output of the region. Orne founded “Upstate Diary” in 2014 as a way to link up the different artists and artisans who, she says, often work in isolation in the woods and mountains. In its pages are intimate interviews with the likes of the model and artist Christina Kruse, the photographer Sheila Metzner and the musician Melissa Auf der Maur. “‘Upstate Diary’ is about people,” Orne says, “what keeps them up at night, what they are struggling with, why they moved upstate, what do they gain from the landscape.”And Nhi and Michael Mundy — who left the city after their apartment was flooded during Hurricane Sandy — launched a small newsprint gazette, DV8, this past summer out of Jeffersonville. It offers up charming portraits and interviews with everyone from farmers and beekeepers to familiar fashion names such as Daryl Kerrigan. “The kind of people who move up here are really practical,” Nhi says. “They can be rough around the edges, like pioneers. I felt like these people have stories that need to be told.”

A version of this article appears in print on Nov. 15, 2015, on Page ST3 of the New York edition with the headline: From the Catskills to Paris. Order Reprints | Today’s Paper | Subscribe